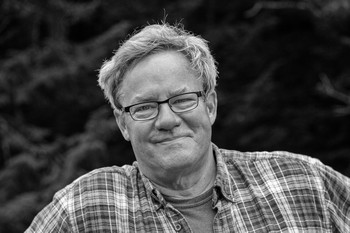 I am a self-taught, rather passionate, amateur photographer. I grew up in Holyoke, Massachusetts and purchased my first camera with my paper route money back in the early 60’s.

While attending Union College I took a number of drawing courses with Arnold Bittleman and fell in love with drawing. Whatever I’ve learned over the years about composition, texture, form and space is built upon the foundation that Arnie provided.

After college most of my photography was “focused” on my young family. I was lucky enough to have inherited a full dark room set up from my uncle. Countless hours were spent in our cellar working on prints of our daughters. There are few things as magical as watching the face of your child emerge up from the developer. I don’t miss the smell of the chemicals, but oh how I miss that magic; there is no digital equivalent.

In the early ‘90’s we moved from Holyoke to Saratoga Springs, NY. Living on the southern edge of the Adirondacks got me out into the woods, first with pencil and paper and eventually with my camera. For years all my photography had been of family, but only the occasional landscape. Ironically years earlier, my wife had given me as a graduation gift Eliot Porter’s Adirondacks. For the 12 years we lived in Saratoga, some of my happiest hours were spent tramping around the High Peaks and lake region of Northern New York.

Through my wife Chris, I made a number of connections that would have a major impact on my photography. Chris had been talking up my photos with some folks she worked with at the Saratoga Land Trust and The American Farm Land Trust. Next thing I knew, I was wandering the farmlands of Saratoga and Washington Counties shooting images for both groups. I began taking the best photos of my life and I found them right in my backyard! Corn fields that I had been driving by my whole life began to come “alive”.  While living in Saratoga I was fortunate to have a solo show at the Open Space Gallery. I was a two time winner of Adirondack Life's Annual Photo Contest, including the grand prize in 1999. In 2000 I was awarded 1st place Color in the Thoroughbred Hall of Fame Annual Photo Contest (first amateur to do so).  In addition to Adirondack Life I've had numerous photos and cover images published in Farm and Land Conservation publications.

We are now living on the coast of Maine. Our lives and my photography are taking on new challenges. I am having more fun than ever taking photos of family and friends. The addition of grandchildren has brought me full circle and with it the greatest of joy.

In addition, I’m working hard to take the lessons I learned shooting landscapes and farmscapes and translate them to seascapes. A whole new way of seeing the light.


What’s in the bag these days?
Cameras:
· Sony A7RIV

Links of Interest:
· The OnLine Photographer